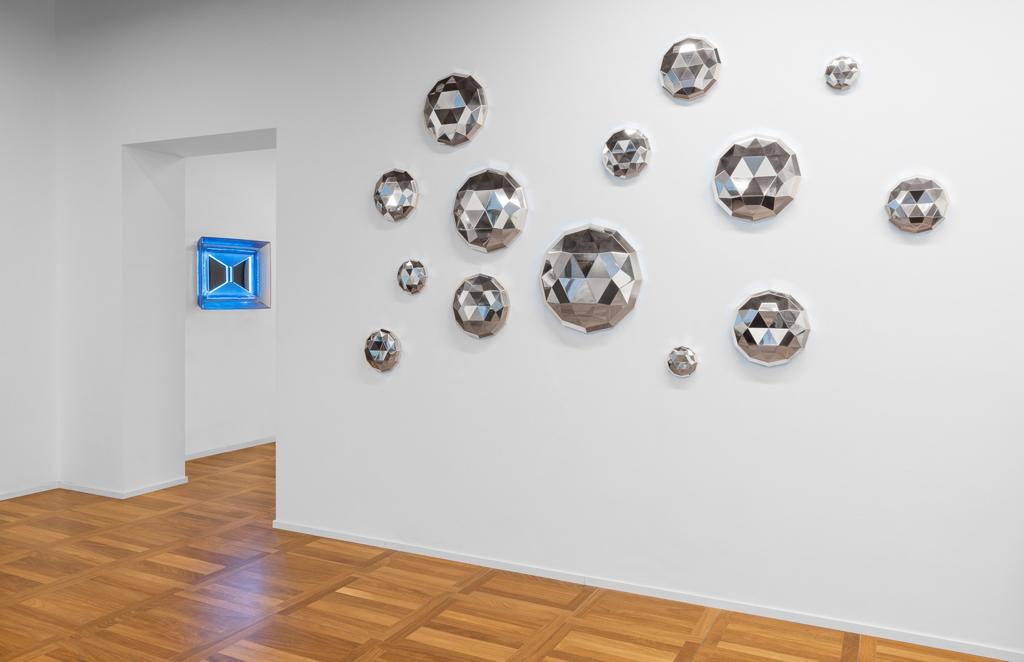 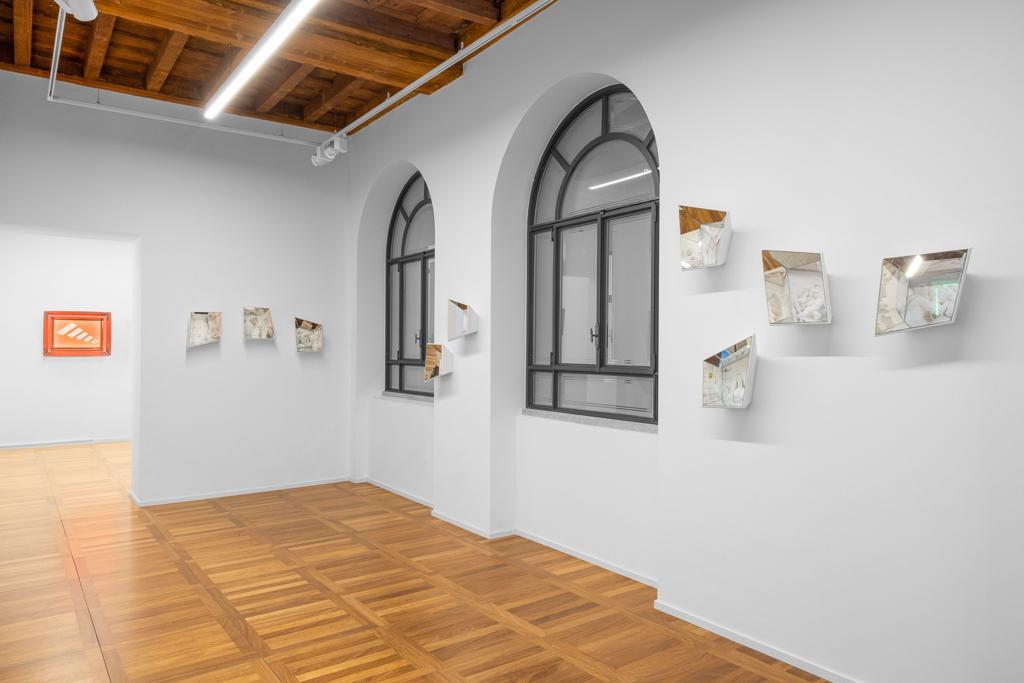 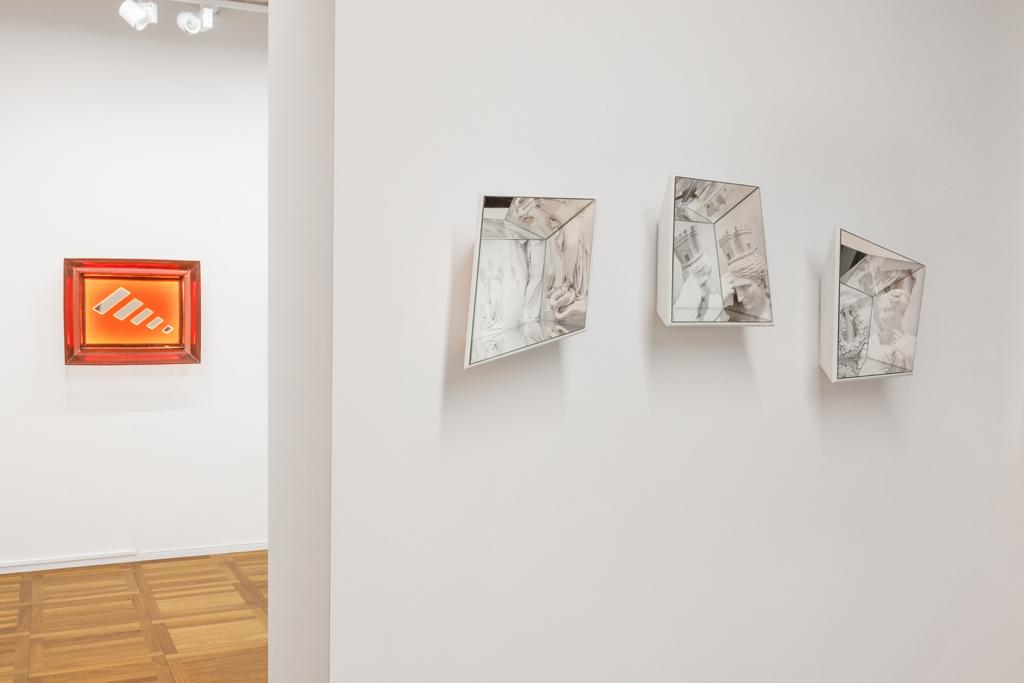 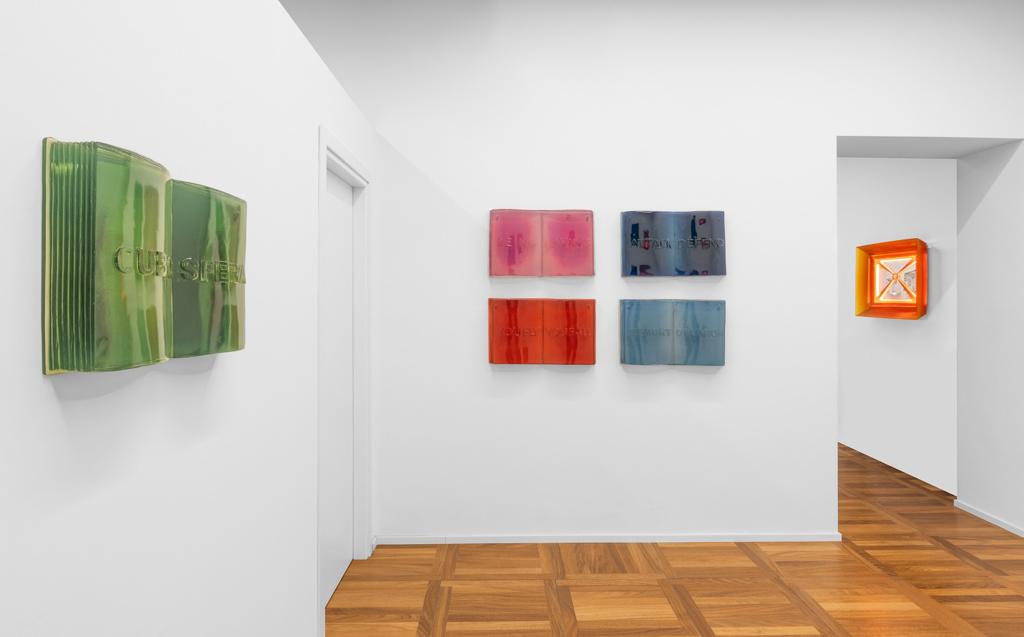 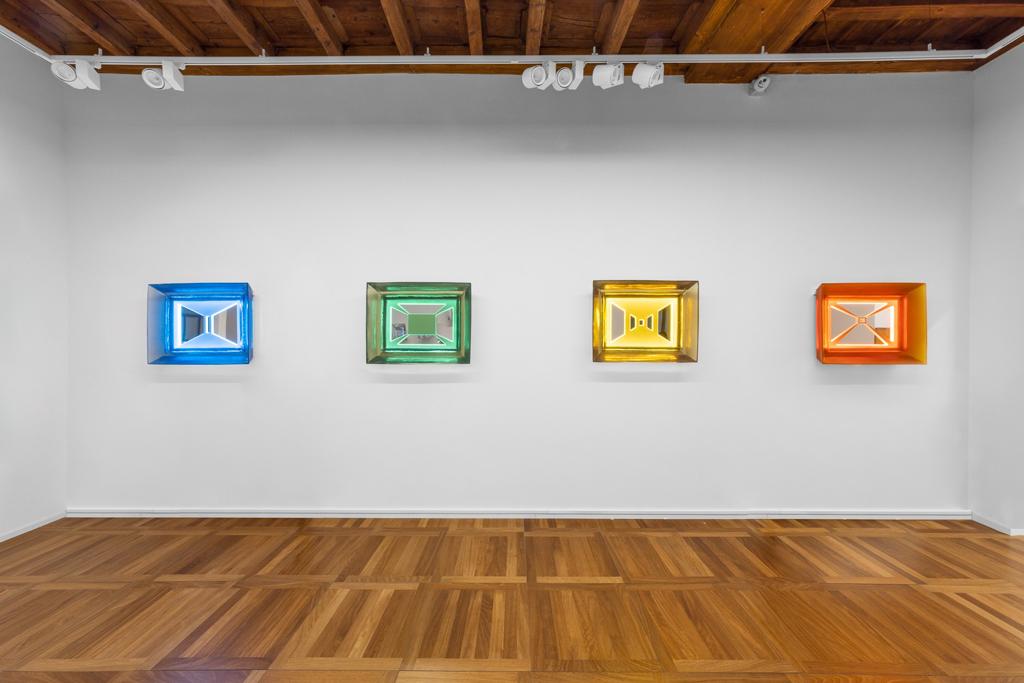 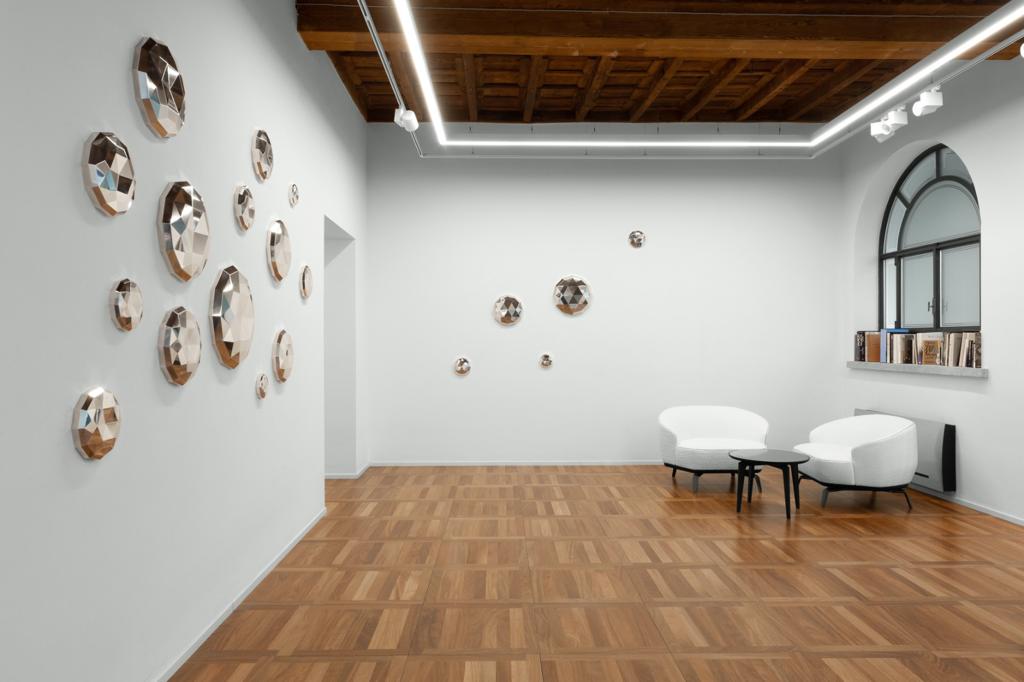 A constellation of bodies that, almost as if without matter, define a luminous universe. A garland that appears before viewers’ eyes and enraptures them, as if captured by an image of total weightlessness that almost seems to fly before our eyes. Luminous and ultra-light elements in transition, but in actual fact complex aluminium creations. The contradiction between opposites, between the material and the immaterial, once again lies at the heart of Chiara Dynys’s work.
The installation, with its museum-like impact, consists of twenty-one dodecagonal shapes in eight different sizes. Each shape, cut by the artist to resemble a diamond, has 122 faces, in perfect harmony between the inward and outward facing elements, and forms part of a comet of elements arranged in an irregular radial pattern on the walls.
The different sizes, together with the concave and mirrored centre of each piece, ensure that each face has a different degree of shine.
The composition of the first sixteen is structured around the largest star, with a diameter of over 55 cm. Its circular shape is reminiscent of Pontormo’s painting of 1526 entitled Transportation of Christ or The Deposition in the Capponi Chapel of the church of Santa Felicita in Florence. The side wall, on the other hand, hosts five stars arranged to recall the shape of the Lyra constellation.
The eternal shining garland, from which the exhibition as a whole takes its name, is thus defined, evoking two complementary yet opposing elements: sculptural physicality and luminous immateriality.

The brand-new Parade Perspective cycle was created specifically for the exhibition at the Cortesi Gallery. It consists of a series of splayed, transparent methacrylate perspective frames in different colours. These frames, which have characterized Chiara Dynys’s work for years, have a coloured Plexiglas back, of the same colour, with cuts in different shapes. Each cut corresponds to a perspective form: colonnades, oblique signs, optical cones and Renaissance-style corridors, crossed by Plexiglas lights that interface with and illuminate the mirrors in the background.
The exhibition is completed by Chiara Dynys’s tribute to the year of Canova celebrations. At 200 years on from the death of the greatest of the Neoclassical masters, who made the ideal of classical beauty his own and was able to bring it to life through marble, Chiara Dynys pays due tribute to Antonio Canova with her cycle La Blancheur, previously exhibited at the Galleria Casamadre in Naples.
La Blancheur, named with a French term that can be translated as “the whiteness”, is a series based on the artist’s original photographs taken in the Possagno plaster cast gallery at the, Museo Canova. They capture details that, through spatial multiplication, become mirrors. Collectors of light in which mirrors juxtaposed with images of neoclassical perfection create a short circuit between reality, perception and illusion.
This title makes reference to the philosopher David Le Bréton, with his prescient assumption about disappearance understood as the temptation to detach oneself from the self, to shed the obligations that permanently impose responsibility without being able to catch one’s breath. La Blancheur is a provisional experience of the weightlessness imposed on us by today’s communication, which has become even heavier as a result of very rapid transformations. A moment of pure suspension.
Also on display are the latest pieces from the Tutto cycle, which has been at the heart of Chiara Dynys’s production since 2015. The idea behind the successful cycle is the opposition and connection between history and contemporaneity. Two opposing words emerge from the pages of an open book and make us reflect on the need to remember and learn on the one hand, and the need to stop looking forward on the other.