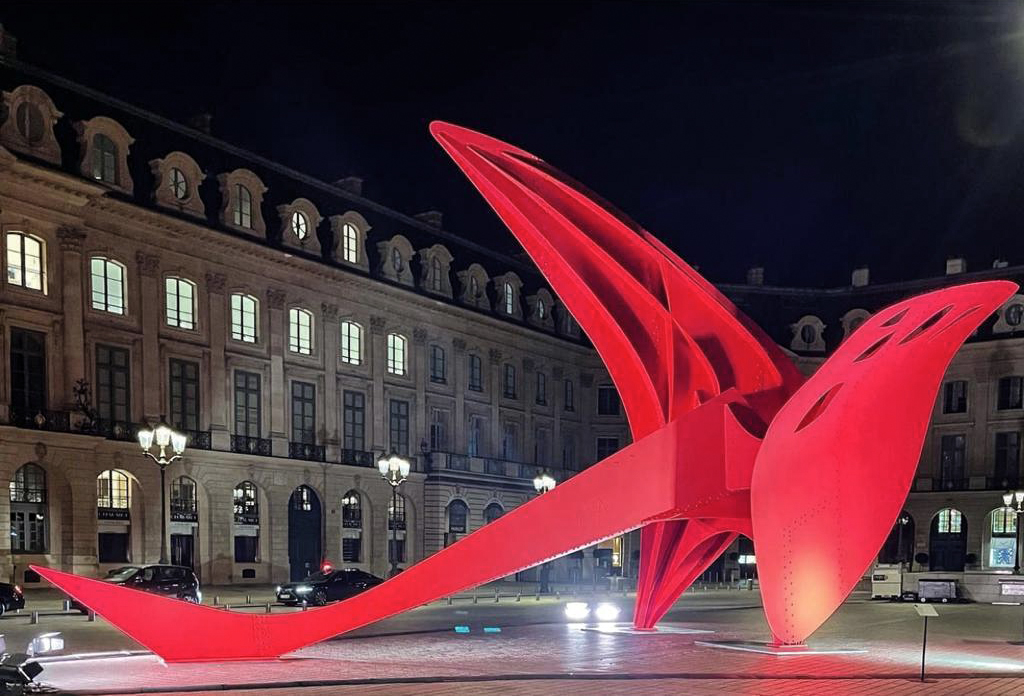 Diana Vreeland once said that in order to become a fashion designer one must arrange their life so that they are first born in Paris. These words only reinforce the mystique and allure of this beautiful city and however the centuries it has served as the epicentre of culture. I myself am of course infatuated with Paris and am always looking forward to visiting (even for work).

Discovering the art of our times.

First event on my itinerary was the exploring Pinault Collection, one of the largest privately owned contemporary art collections. The collection was displayed in the Bourse de Commerce.

I was fortunate enough to be invited to view this landmark exhibition organized by the “Louis Vuitton Foundation”. In partnership with the State Hermitage Museum this major international exhibition brings together 200 masterpieces from the French and Russian modern art collection of the brothers Mikhaïl and Ivan Morozov. This was the first time the collection has travelled outside of Russia since its creation.

Anselm Kiefer and Pascal Dusapin installation for the Pantheon.

Commissioned by President Emmanuel Macron, artist Anselm Kiefer and French composer Pascal Dusapin have created a series of permanent works to be displayed in the monument. The installation was envisioned as a tribute to Genevoix, the renowned author of ‘Ceux de 14’, based on his experiences of fighting in the trenches during the First World War and is a must see for any art enthusiast.

While the art scene in Paris is second to none, navigating it without the many restaurants and cafes would be a much less enjoyable experience. Seeking to explore Parisian culture and not partake in the history and taste of the local cuisine is simply an incomplete experience. Not only do the many restaurants and bars provide one of the greatest dining experiences, they also serve as cultural landmarks all on their own. Here are some great examples I visited on this latest trip:

Our first stop is the jaw dropping “Le Train Bleu” restaurant and bar. A place where the rich heritage blends with a premium gourmet experience.

It was in 1900 at the time of the Universal Exhibition that the station buffet, which later became Le Train Bleu, was built. Marius Toudoire, the famous architect behind the Gare de Lyon clock tower and façade, was entrusted with carrying out these works.

The station buffet was unveiled in 1901 by the French President Emile Loubet and quickly attracted people from high society and artists.

In 1963, the buffet became “Le Train Bleu” as a tribute to the “Paris-Vintimille” line dating from 1868, the legendary train that served towns in the French Riviera along the Mediterranean coast.

Since then certain halls of the “Le Train Bleu” were recognized as historical monuments. A must visit spot for history enthusiasts.

In Paris the appreciation of history can be found in many different forms. This is why I fell in love with one of the city’s best kept secrets. The “Girafe Paris”.
Inspired by the old school Parisian charm the breathtaking space was designed by Joseph Dirand, one of the most sought after designers working today. In a single word I would describe it as “immaculate”. The design retains many of the architect’s trademarks such as soft shapes, creamy tones and liberal use of sculpted marble. The end result is an opulent space which still feels welcoming and cozy.
The restaurant features an impressive terrace with an unobstructed view of the Eiffel Tower where visitors may enjoy the many seafood dishes and fine wines.

For seafood connoisseur “Langosteria Paris” can not be recommended enough thanks to the chain’s commitment to the absolute freshness of the finest ingredients. Inspired by Italian cuisine, Langosteria is an ode to fish and seafood in all their forms, with inspiration drawn from the South and its seasonal markets.
The restaurant also boasts a sleek modern interior with decks featuring the best views of Paris.

Paris, true to its heritage, is a city of the world where all cultures (especially culinary) are welcome. Located in the city’s heart “Ran” creates an alluring fusion of contemporary Japanese cuisine enhanced by French gastronomy.
A vision of Japan both modern and old, visitors can expect to enjoy cocktails with Japanese notes, sensual neon lights and an elegant space designed by Tristan Auer.
To appreciate this unique blend of aesthetics (and flavors) I recommend visiting during the later hours.

#walk around the #wonderful center of #cremona #it